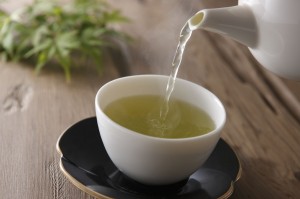 What is green tea?

Tea is, worldwide, the most drunk beverage after water. All tea, apart from herbal teas, comes from the bush, Camelia sinensis, with around 78 per cent being black tea and around just 20 per cent producing tea green in colour. The difference between the two types of tea is that green tea is made from brewing unfermented, unprocessed leaves rather than the fermented ones used in black varieties. Green tea has been drunk in Asia for five thousand years but has only recently been drunk in sizeable quantities in the western world.

These days you can buy green tea in your local supermarket either as leaves or in tea bags. It is often blended with ginger, lime or lemon. There are many grades available including the high status ones in Japan such as the yellow-green slightly astringent Sencha and the green Matcha now used in several desserts and drinks. If buying leaves it is best to use ones which are less than four months old.

In the mountainous areas of Asia, where tea bushes used to make green tea are grown, the population seems to develop fewer cancers. There has, therefore, been a great deal of interest in the West as to what protective properties green tea may have. Traditionally, green tea was used to regulate body temperature, improve both heart and mental health, aid digestion, control bleeding and facilitate wound healing. According to the US national cancer institute several Western studies have shown positive effects of green tea on a variety of cancers including the reduction of tumour size. In 2006, a study published in the Journal of the American Medical Association found an association between green tea and reduced mortality (particularly from heart disease). Other studies have shown an association between green tea and a reduction of both total and of bad (LDL) cholesterol, a reduced risk of stroke and of Type 2 diabetes. Other studies suggest that green tea may reduce the risk of Alzheimer’s and, even, arthritis. Because of all these potential health benefits chiropractors such as Sunbury Chiropractor would like their clients to regularly drink green tea as part of their treatment.

How does green tea create these health benefits?

As green tea is much less processed than black tea it contains far more polyphenols which contain antioxidants that reduce inflammation (caused by oxidation) at the root of so many health problems. Green tea contains between 25 and 45 per cent of polyphenols by weight, 60 – 80 per cent of which are catechins – the antioxidants which prevent the cell damage that causes the inflammation which eventually leads to disease. With so many health benefits associated with green tea it can be a beneficial part of a health stratagem using chiropractor medicine.

View all posts by Gordon